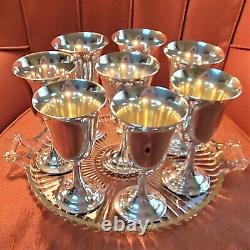 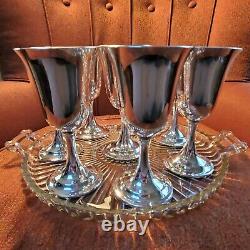 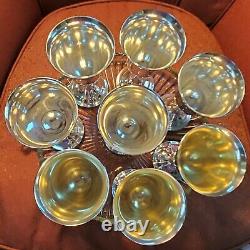 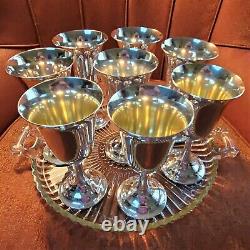 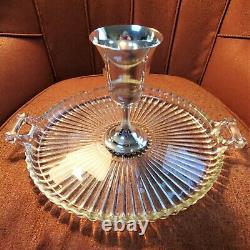 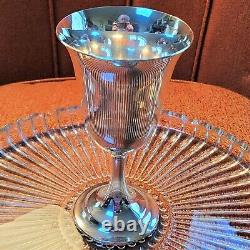 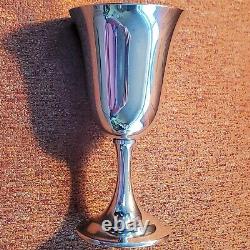 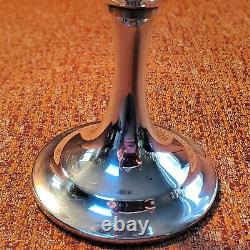 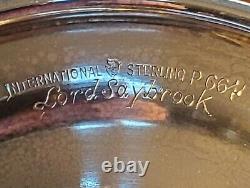 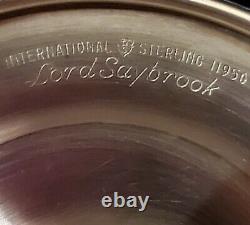 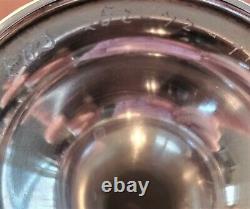 Offered for sale by Caspars Place is a set of 8 sterling silver water goblets in the holloware pattern LORD SAYBROOK introduced in 1959 by the International Silver Company. They are classic and simple in design. Three of the goblets are gold washed on the interior. Each goblet is marked with International Silver, the companys makers mark; and STERLING. Five are marked "P664" (2 gold washed; 3 not), and three are marked "11950" (1 gold washed; 2 not).

Goblets with the two "model" numbers look identical. A popular American silverware producer for over a century, International Silver Company operates out of Meriden, Connecticut. Near the end of the 19th century, the silver production industry became increasingly competitive. Meriden Britannia and Rogers Brothers organized a cartel of silverware manufacturers to take advantage of economies of scale and to share industry secrets. In 1898, ISC incorporated in New Jersey.

The artisanship and uniqueness of each individual company remained relatively intact. Each company maintained its separate identity.

When you're looking at antique silver, note that initially the individual companies that joined ISC did not use the standard mark of the company as a whole, but rather continued to use their own marks. In 1968 ISC was absorbed into the Insilco holding company.

Wallace and ISC once again became separate entities when Katy Industries was bought by Syratech Corporation, which already included under its umbrella Leonard Silver and Towle Manufacturing Company. These goblets are NOT monogrammed. They are in good estate condition, although with the patina of old tarnish and fine scratches to be expected with age and use. The one condition exception is that a series of numbers have been etched on the bottom of each goblet. Also, the gold wash is faded with age.

The goblets price reflects their condition. This set of water goblets will make a lovely addition to any silver collection. The set combined weighs approximately. Each goblet is roughly 6.625 tall by 3.5 in diameter.

At Caspar's Place we pride ourselves on our offerings and represent each item to the best of our ability. Please bear in mind that we do our best to describe and photograph each item, but pre-owned items are often imperfect and show the effects of age and use. Note that the photographs are an integral part of the description. If you are purchasing multiple items within a single calendar day.

Thank you for shopping with Caspars Place today! The item "8 water goblets LORD SAYBROOK by International 6.625 in sterling silver NO mono" is in sale since Thursday, December 24, 2020. This item is in the category "Antiques\Silver\Sterling Silver (.

The seller is "shayhoward" and is located in Durham, North Carolina. This item can be shipped to United States.